A nightmare, also called a bad dream,[1] is an unpleasant dream that can cause a strong emotional response from the mind, typically fear but also despair, anxiety and great sadness. The dream may contain situations of discomfort, psychological or physical terror or panic. Sufferers often awaken in a state of distress and may be unable to return to sleep for a short period of time.[2]

Nightmares can have physical causes such as sleeping in an uncomfortable or awkward position, having a fever, or psychological causes such as stress, anxiety, and as a side effect of various drugs, such as Psilocybin mushrooms. Eating before going to sleep, which triggers an increase in the body’s metabolism and brain activity, is a potential stimulus for nightmares.[3]

Recurrent nightmares may require medical help, as they can interfere with sleeping patterns and cause insomnia.

Scientific research shows that nightmares may have many causes. In a study focusing on children, researchers were able to conclude that nightmares directly correlate with the stress in the children’s lives. Children who experienced the death of a family member or a close friend or know someone with a chronic illness have more frequent nightmares than those who are only faced with stress from school or stress from social aspects of daily life.[4]

In Stephen LaBerge’s book entitled Exploring the World of Lucid Dreaming (1990) he outlines a possible reason for how dreams are formulated and why nightmares occur with a high frequency. A dream starts with an individual thought or scene, in his example he uses the scene of walking down a dimly lit street. Since dreams are not predetermined your brain responds to situation by either thinking a good thought or a bad thought and the dream framework follows from there. Since the prominence of bad thoughts in dreams is higher than good, the dream will proceed to be a nightmare.[6]

A study involving a large group of undergraduate students analyzes the effects of nightmares on the quality of sleep. The study showed that the participants experienced abnormal sleep architecture and that the results of having a nightmare during the night were very similar to those of people who suffer from insomnia. This means that, like insomniacs, people who suffer from nightmares do not get as much rest as those who do not suffer from chronic nightmares. Therefore, they experience a lesser quality of sleep than others. This is thought to be caused by frequent nocturnal awakenings and fear of falling asleep.[7] 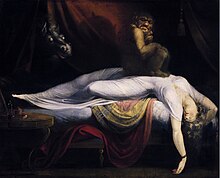 Freud and Jung seemed to have shared a belief that people frequently distressed by nightmares could be re-experiencing some stressful event from the past.[8] Both perspectives on dreams suggest that therapy can provide relief from the dilemma of the nightmare experience.

Halliday (1987), grouped treatment techniques into four classes. Direct nightmare interventions that combine compatible techniques from one or more of these classes may enhance overall treatment effectiveness:[9]

Reoccurring post-traumatic stress disorder nightmares in which real traumas are re-experienced respond well to a technique called imagery rehearsal. First described in the 1996 book Trauma and Dreams[10] by Harvard psychologist Deirdre Barrett, this contemporary dream interpretation involves dreamers coming up with alternative, mastery outcomes to the nightmares, mentally rehearsing those outcomes awake, and then reminding themselves at bedtime that they wish these alternate outcomes should the nightmares reoccur. Research has found that this technique not only reduces the occurrence of nightmares and insomnia,[11] but also improves other daytime PTSD symptoms.[12] According to Bret Moore and Barry Kraków, the most common variations of Imagery Rehearsal Therapy (IRT) “relate to the number of sessions, duration of treatment, and the degree to which exposure therapy is included in the protocol”.[13] Another kind of treatment not only helping the reduction of nightmares, sleep disturbance, and other PTSD symptoms is prazosin. There have been multiple studies conducted under placebo-controlled conditions. (Am J Psychiatry 2003; 160:371–373)

A comprehensive model has been put forth by Krakow and Zadra (2006) that includes four group treatment sessions, ~2.25 to 2.5 hr in length. The first two sessions focus on how nightmares are closely connected to insomnia and how they become an independent symptom or disorder that warrants individually tailored and targeted intervention. The last two sessions focus on the imagery system and how IRT can reshape and eliminate nightmares through a relatively straightforward process akin to cognitive restructuring via the human imagery system. First, the patient is asked to select a nightmare, but for learning purposes the choice would not typically be one that causes a marked degree of distress. Second, and most commonly, guidance is not provided on how to change the disturbing content of the dream; the specific instruction developed by Joseph Neidhardt is “change the nightmare anyway you wish” (Neidhardt et al., 1992). In turn, this step creates a “new” or “different” dream, which may or may not be free of distressing elements. Our instructions, unequivocally, do not make a suggestion to the patient to make the dream less distressing or more positive or to do anything other than “change the nightmare anyway you wish.” Last, the patient is instructed to rehearse the “new dream” through imagery and to ignore the old nightmare.p. 234[13]

Some people may experience recurring nightmares due to posttraumatic stress disorder (PTSD), or they may have some other source of anxiety that influences their dreams at night.[8] Whatever the cause, there are treatments available, some of them medical and some psychological. While most treatments are meant for people who have a true disorder, the techniques discussed above will work well for any person dealing with nightmares.[8]

Fearfulness in waking life is correlated with nightmares.[14] Studies of dreams have estimated that about 75% of the time, the emotions evoked by dreams are negative.[14] However, it is worth noting that people are more likely to remember unpleasant dreams.

One definition of “nightmare” is a dream which causes one to wake up in the middle of the sleep cycle and experience a negative emotion, such as fear. This type of event occurs on average once per month. They are not common in children under five, but they are more common in young children (25% experiencing a nightmare at least once per week), most common in teenagers, and common in adults (dropping in frequency about one third from age 25 to 55).[14]